While we have all heard of common toxins for dogs (i.e. chocolate, antifreeze, grapes, raisins etc), there are many less known toxins that are becoming more common. Xylitol is an ingredient that is used as a sugar substitute in a lot of sugar-free products, such as chewing gum and sugar-free candy. There are even some peanut butter products that contain xylitol. While humans can tolerate this carbohydrate very well, our pets cannot.

In dogs, ingestion of xylitol causes a massive insulin release from the pancreas which moves the sugar that is in the bloodstream into the body’s cells. This massive insulin release will actually leave the dog with low blood sugar (hypoglycemia). This can result in the dog becoming ataxic (loss of control of body movements) and in some cases causing seizures and death. In higher doses, xylitol can cause liver failure and death.

Hank is a 3 year old, male Labradoodle that presented to Forest Hill Animal Clinic in lateral recumbency, unconscious and unresponsive. His distressed owner reported that he had had a seizure at home and multiple seizures on the way to the clinic. She reported that the only thing unusual about Hank that morning was that he had eaten a full family pack of sugar free gum (all 57 pieces). A blood sugar reading was taken immediately and Hank was severely hypoglycemic. An intravenous catheter was quickly placed by our Registered Veterinary Technician and we instituted hypoglycemic therapy and were able to get the blood sugar back into a safe range.

Information from the ASPCA Poison Control stated that a dog ingesting 400mg/kg of xylitol could lead to liver failure. Sadly, Hank had gotten 2100mg/kg of xylitol. Within 24 hours Hank’s liver values were increased 10 times normal. Even though he was clinically bright, all the staff members along with the owners were concerned about how he would do over the next 48 hours. Hank was transferred to the Central Toronto Veterinary Emergency Clinic for 24-hour care. They treated Hank with liver protectants with the hopes that this would help limit the damage to his liver.

Hank continued to do well on intravenous fluids and was discharged to go home to continue to recover. We just checked his blood one week after discharge and his liver values are back into the normal range. We are going to continue him on liver protective medications for another month, but couldn’t be happier regarding our expectation of a full recovery.

We felt that it was important to share this case with our clients as xylitol toxicity is not a well known pet toxin. Please check your food products for the ingredient and exercise caution if you use products that contains xylitol. 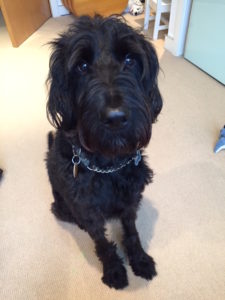